In 1956, Betty Wagner and six other women met in Franklin Park, Illinois to share information on how to successfully breastfeed their babies. The group quickly attracted the attention of other women and became an organization called “La Leche League.” Betty was expecting their fifth child, and when asked to be a part of the group that was being organized to help breastfeeding mothers, she was eager to join. 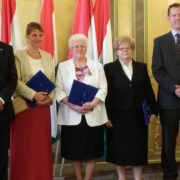