Background Donor human milk banks are much more than simple centers for collection, storage, processing, and distribution of donor human milk, as they cover other aspects and represent a real opportunity to promote and support breastfeeding. The aim of our study is to assess the impact that opening a human milk bank has had on the proportion of infants receiving exclusive breast milk at discharge and other aspects related to feeding children with birth weight < or = 1500 g or < 32 weeks gestation admitted to the neonatal unit.

Methods The study included babies of < or = 1500 g or < 32 weeks gestation. Fifty infants born from February to July in 2006, before the opening of the human milk bank, and 54 born from February to July in 2008, after its opening, met inclusive criteria. We collected data about days of hospital stay, hours of life when feeding was started, hours of life when full enteral feeding was attained, the type of milk received during admission, and the type of feeding on discharge.

Conclusions The opening of a donor human milk bank in a neonatal unit did not reduce the proportion of infants exclusively fed with breast milk at discharge, but did reduce the proportion of infants that received infant formula during the first four weeks of life. Also, having donor human milk available enables commencement of enteral feeding earlier. 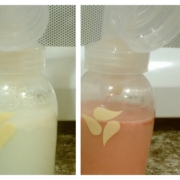 Evaluation of the evidence to support current recommendations to meet the needs of premature infants: the role of human milk

Breast Milk as the Gold Standard for Protective Nutrients Towards Universal Kangaroo Mother Care: Recommendations and report from the...
Scroll to top