Methods
A prospective cohort study of 1280 women aged ≥ 16 years, who gave birth to a single live infant in the Australian Capital Territory in 1997 was conducted. Women completed questionnaires at weeks 1, 8, 16 and 24 postpartum. Breastfeeding information was collected in each of the four surveys and women were categorised as either fully breastfeeding, partially breastfeeding or not breastfeeding at all. Women who had stopped breastfeeding since the previous survey were asked when they stopped.

Conclusion
Women in this cohort who had epidurals were less likely to fully breastfeed their infant in the few days after birth and more likely to stop breastfeeding in the first 24 weeks. Although this relationship may not be causal, it is important that women at higher risk of breastfeeding cessation are provided with adequate breastfeeding assistance and support.

Distribution and excretion of sumatriptan in human milk 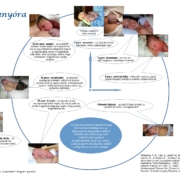 Newborn behaviour to locate the breast when skin-to-skin: a possible method for enabling early self-regulation.

Does skin-to-skin contact and breast feeding at birth affect the rate of primary postpartum haemorrhage: Results of a cohort study.